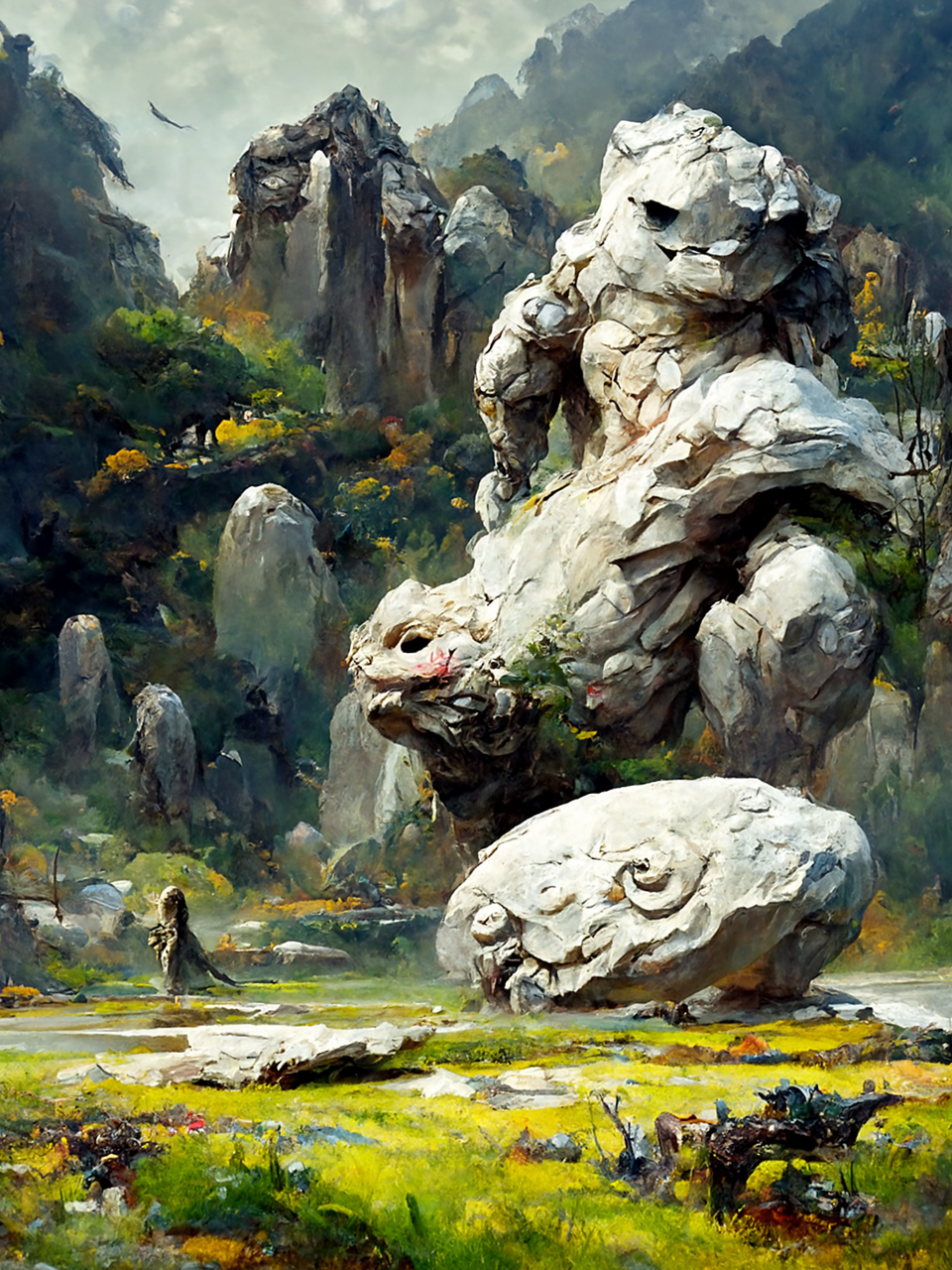 Hello Again! After much anticipation, the Earth faction is finally here. Algomancy now has three of the five total factions that you will see in the final game. The remaining two are Water and Metal.

This post will cover the mechanics of the earth faction, some rules clarifications and some information on game options.

As this game gains a following and more people are introduced to my raw designs for playtesting, I thought it may be helpful to give a bit of explanation as to how I design. This was largely inspired by the reactions of people thinking I had lost my mind with the new earth faction but were likely not around for what the fire and wood factions looked like upon release day to use as reference.

At the early stage of design I don’t like to limit myself with considerations of card balancing or metagame implications. The first step is just getting out the raw ideas for what could be. This gives me a lot more freedom with crazy ideas and significantly speeds up the design process since I don’t spend any time thinking about how to make the ideas fit into the existing world of cards. A good example of this is Towering Colossus below. I wanted to make something that felt HUGE, but with a flavorful drawback. I have no idea how this card will play out, but I’m eager to find out.

Now, I do have to actually put these ideas onto physical cards. So at some point there is a need to make some sort of considerations as to how much an effect should cost and what stats it should have, etc. But I often just shortcut these decisions by over-exaggerating my initial thoughts on the card. If its an enabler it should be cheap and small, if its a self-sustaining effect it should be bigger and more expensive. Again, this helps me to speed up the process.

The above stage is generally when I start playtesting with the cards. I have abilities and a vague estimate of how strong they MIGHT be, but I don’t think it is particularly useful to spend time deliberating between questions like “should this have 3 or 5 toughness” until I can actually see the cards in action. In game it is generally pretty obvious when a card is off the mark, and updating the card to reflect this new understanding is quick and easy to do.

Obviously as I get more experience with designing cards within a game my initial guesses will get better over time. But there are some effects I make and have absolutely no idea how to evaluate them, and allowing myself the freedom to say “This seems cool, lets just see what happens” I think is what will make for the most interesting game at the end. Two examples of cards like this are the following.

At this point, these cards are just cool effects placed onto creatures. Child of Aether has actually already undergone one balancing change, it started out as a 1 cost 2/0 but it was enabling swings for 17+ damage on turn 2, so I weakened it to make it more interactable and made it more expensive to slow it down. I also nerfed the other problematic card (which was a 2 cost 0/10)!

Reality bender is an effect that I absolutely love. It is a mutation, so you can play it on your opponent’s big creatures to kill them (if they have been buffed with counters or other effects), or put it on your own creatures to happily soak up poison counters. You can also pair it with some of the other cards in the set for some wild interactions.

Grave spawn on its own dies unless you have 12 or less life. But it works as an efficient removal spell in the early game and can do some wild stuff with reality bender in the late game. Is this effect too powerful? Probably.

In theory you could play reality bender turn 1, then mutate grave spawn onto it turn 2, swinging with a 32/33 creature. This is highly susceptible to removal but still probably not the healthiest interaction to exist in the game. Whether it is Grave Spawn or Reality Bender that needs to be reigned in, I’m not sure of yet, so I’m going to let them both play out as they currently are and see which one of them has the most impact outside of that specific combo.

Anyway, that was a lot of words to say that in general you’re going to see some wild stuff during the early days of testing new sets. I do this because I would rather have wild and interesting effects than cutting out ideas before they even have a chance. Often, effects I think would be too strong end up being fun and balanced after all!

TLDR: I Design freely, test and balance often. By the time you are reading this, some of the cards in this post have probably been changed.

Enough of that, let’s talk about earth!

The earth faction is all about creatures, and in particular their attributes. It is split into two main themes: Crystal and Rock (with Earth being sort of a middle ground between the two for the less-archetype specific cards).

Crystal is all about reality bending Attributes that you can pile up to create some wild scenarios. While the two crystal creatures above are great examples of what this theme of cards do, Aether Channeler is also a fun one. The key to this faction is fitting together the puzzle pieces of how to create something enormous out of all these small enablers.

Rock is about big creatures. As big as I could possibly make them, and their interesting drawbacks. There is quite a bit of stats matter mechanics, but I also just wanted an option for people who just want to attack with some big dumb beaters. Even if Crumbling ancient only really deals 3 damage, there is something awesome about attacking with a 7/8.

A key thing to keep in mind with the earth faction is that most of these drawbacks are Mutations, meaning you can play them on an opposing creature for some interesting interactions! Take crumbling Ancient above. If you put it on an opposing creature, that creature will receive double damage. Seems like a fun thing to throw onto the creature blocking your Verdant source! Or even more interestingly, put it on your own Grumpent Lefnear.

Along with the new Attributes (the abilities above the title line like balanced and tough in the two creatures above) in the earth faction came a lot of confusion about how certain abilities interact. If we look at the two cards above, we have the Balanced ability, which “equalizes” our stats and the Tough ability, which doubles our toughness.

Two creatures in a column share attributes, so if you stack both of these two cards together, the question was brought up: How do they interact? If we apply balanced and then tough, Huge dude becomes a 3/3 and then a 3/6. If we apply tough then balanced, it becomes an 0/6 and then a 6/6. Two very different outcomes!

To simplify things, for now I am using the ruling that you read and apply attributes top to bottom. If you have a formation with Huge Dude on top and Child of Aether behind it, they both get tough applied and then balanced (giving you a 6/6 and a 1/1). If Child is in front, they would have Balanced applied before tough, giving you a 1/2 and a 3/6.

If you Augment a Child onto Huge dude, the Child’s Attribute shows up below Huge dude, so you would apply the effects in that order.

If you had Huge dude, Augmented with Child of Aether in the top row, with Spined Tantelope Below it, you would double the toughness, equalize the stats then double the power in that order (and would end up with a 12/6 and an 8/4!)

This isn’t perfectly true, and I haven’t fully formalized my thoughts on this topic, but in general I am trying to design factions to keep themselves in check. Not with explicit hate cards, but moreso with their general gameplay patterns. The earth faction is lacking in card advantage engines, but makes up for it with having the ability to build up singular large creatures that are worth more than the sum of their parts. The removal is largely based on mutations, which trade 1-for-1 at best, since they go to the bottom when they work. There is not much room for graft based card advantage, most of the hard work will be done through augmentations.

All of this together means the Earth faction is weak to hard removal and strategies that build up advantages over time or go wide like the Wood faction, but really strong against small or incremental damages like the fireballs in the red faction. Earth generally wants to end the game fairly quickly through a rush of creature-based combos.

So right now, the “balance triangle” is something like Rock beats fire, but loses to wood. Wood beats rock, but loses to fire. And Fire beats Wood and loses to Rock. Again, this is not explicitly true, you can definitely beat rock with fire, but in general terms these playstyles have advantages and disadvantages which I am hoping balance each other out.

TLDR: I’m aiming for a variety of complementary and self-balancing playstyles among the archetypes in Algomancy without resorting to “Hosers” or Hate cards.

Playtesting is free and open to anyone! The best place to get started is in my discord, where you can find others to play with as well as keep up to date with card changes and the current rules. We have tournaments and multiplayer events regularly as well!

There is also this post, with more information about digital playtesting.

If you want to get email updates about Algomancy like this, and be notified when the game becomes available, you can sign up to the email list through this link.